One of the hardest forms of stenography comes in the form of live television captioning.  It is a field reserved for the best of the best… those who can achieve a consistent and astronomically high accuracy rate, have a knack for remembering minute details from the last few decades of important events, and the stamina to maintain absolute focus for long periods of time.

However, when it comes to talk shows, morning breakfast television, or live debates, this level of accuracy becomes much harder to maintain.  More speakers bring captioners additional challenges, such as new-speaker IDs, interjections and overlapping speakers, and speedy conversationalists to deal with when writing.

For example, it is common in these show types for speakers to talk over one another.  The debate on Monday evening was no different, with hot debate topics and highly opinionated candidates looking to sway voters, making parts of the debate literally incomprehensible. 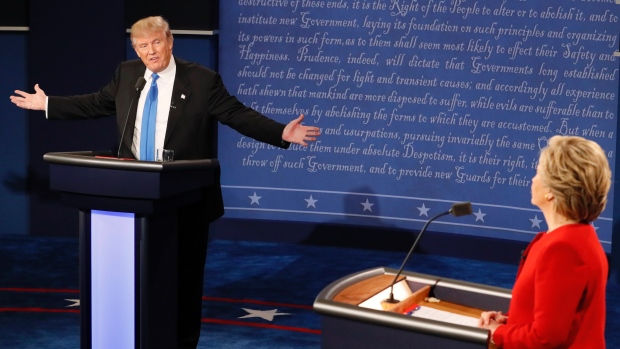 Including interjections from the moderator, and Hillary Clinton’s interruptions of Donald Trump, there needed to be a lot of “mental gear-switching” for the captioners as they tried to rally all the speech into their brains to process the output so that it made its way onto our television screens at home.

Here are some thoughts from our captioners on the experience:

Well, it was interesting captioning the debate. I don’t think you can really ever prepare for anything that Trump says.  Be sure to have your dashes ready, because you know there will be a lot of interruptions.

I was so nervous since it was my first time captioning the debates, but it was pretty awesome to be a part of history in the making. I had to give myself a pat on the back for my speaker markers. I used the whole LEFT side of my keys for Hillary Clinton and the whole RIGHT side of my keys for Donald Trump. I was amused when Donald said Brag-a-do-ish, and I had fun writing it!

I came in and relieved Jennie part way through. My portion seemed way more tame than I was expecting.  I think, and as I’ve heard people say, they were on their best behavior for this first debate. I think the gloves will be coming off for the next two though! And apparently we need to be ready for material that could resurface as they mudsling issues dating back 20-40+ years on one another. (Think “Alicia Machado” Miss Universe 1996.)

I liked having the split screen showing both Trump and Clinton at the same time. You could just tell when there was about to be an interruption just by seeing their facial expressions alone. I had my [OVERLAPPING SPEAKERS] brief ready to fire off at will, but surprisingly, I didn’t need to use it for this debate. The moderator seemed helpful by taking more of a backseat and letting the candidates finish their rants, for the most part. Not sure if that was helpful to the viewing public, but having one less voice trying to interject to take control of the conversations sure helps out the captioner!  I wonder if we will be so lucky with the next debate or if it will be a messy yelling match full of unintelligible, fragmented thoughts and sentences within the first 5 minutes! Can’t wait to find out, but yet “so over it” at the same time. I’m guessing that sums up the sentiments of most people by now…

The anticipation is a lot worse than the event.  However, I did experience a glitch that any captioner would appreciate.  I had spelled Hillary wrong in speaker notification, and had to try to fix it on the fly with no breaks.   It may sound like something small but it felt like one of my tires went flat, being as there is no pause and there may be a large audience watching.

To say the least, it is a stressful event to live caption!  But our captioners, as always, handled the coverage with their usual ease and standard for excellence.

Now, only two more to go until election time!