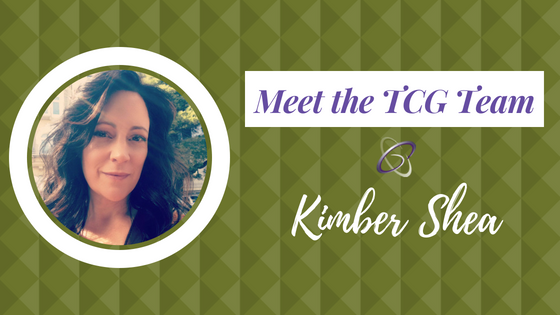 You’ve met members of our office staff, and now, we want to introduce you to our fine team of captioners.  Please enjoy our exciting series of articles where we take a closer look at our TCG captioners, their most challenging on-air moments, and what it is about this unique career that they love so much.

This month, we get to know a little more about Kimber, a self-proclaimed news junkie that loves the ever-changing landscape of her career.

1992, I was a single mom and met a woman who was also a single mom. In my younger years, I originally wanted to go to law school. Life happened. Court reporting interested me greatly, and I took to the machine naturally. Never looked back.

Oh, and public comment for the SFGov Ethics Commission where there’s yelling about the end of times and failing the Constitution. I can’t make this stuff up.

I love almost every aspect of it. I like working hard to make sure information is accessible to everyone. I take the responsibility seriously, and I’m proud of the skill I’ve built over two-plus decades. I’m someone that really likes working from home. As an introvert, it’s where I am most productive. I’m venturing out to on-site convention work, so we’ll see how that goes. Travel interests me now that my kids are grown. 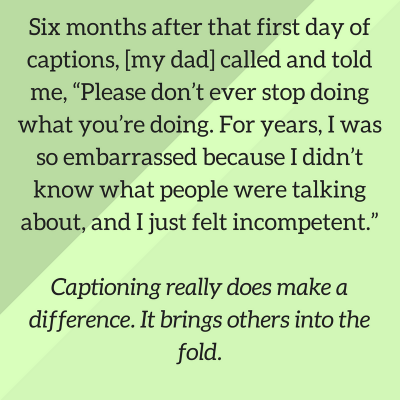 School shootings. The Las Vegas shooting. One day my spouse peeked in my office because he heard something weird. It was me captioning with tears streaming down my face, and the noise he heard was me clearing my throat and gulping as I held myself together and tried to stay focused.

I’ve done both. I love both. I prefer captioning. Captioning is always changing, rarely boring, and the challenge keeps you on your toes. I’m a news junkie anyway, so when I switched to captioning, I was “home.”

Disadvantage…the lack of FCC mandates and certifications required to preserve quality captions and our profession, and to prevent investment firms from coming in, slashing rates, and trying to replace us with poor voice-recognition software to line their pockets.

March 2010, my FIRST on-air event. My hands were shaking. That’s when I found out that under extreme duress, my fingers misstroke “male” and “meal” REPEATEDLY … on a RELIGIOUS show … in BUFFALO … while referring to the kid table at a church dinner! Long afterward, this became one of the most hilarious things people tease me about. My errors seem to always be sex-related. It’s a gift, really.

>>I MARRIED SOMEONE FROM NEW YORK, AND WE LIVED HERE EVER SINCE AND ENJOYED BUFFALOES. (city of Buffalo)

>>PASSOVER IS A MAJOR JEWISH HOLIDAY, AND AT THAT TIME THEY INVITE OTHER JUICE TO SHARE IN A MALE. (*Jews and male/meal)

>>WE WORK VERY CLOSE TOGETHER IN PUTTING THIS ALL TOGETHER.

THE CHILDREN AND ADULTS DID NOT SIT TOGETHER.

IT WAS JUST TWO AT EACH TABLE, SO THEY HAD TO INTERACT.

>> SO SPERM SPREAD AROUND. (I can’t even begin to remember what “sperm” was supposed to be)

THE WHOLE COMMUNITY WAS INVITED TO PARTICIPATE IN THE MALE. (meal/male was fixed immediately)

My dad is 90 and relies on captions. In 2010, he didn’t use them because he didn’t know much about them, and we didn’t know he needed them. I went to visit. After explaining that I left reporting, I tried to explain captioning. He wasn’t getting it, so I turned his TV on and showed him. He couldn’t believe it was right there. That was when we all found out how bad his hearing really was.

There’s a lesson in there about pride, I’m sure; but he’s from Peru originally, with an Italian heritage, and with his generation and culture, it was no surprise that he had been hiding it for years. He was a physician for 50-plus years, a surgeon for 30. He’s well-traveled, well-educated, extroverted. In his 70s, we started noticing his inability to hear us. He played it off. In 2010, when I showed him the captioning, he really hadn’t been able to hear for years. He would sit in our family discussions and participate by reading lips or taking cues from others, picking up things here and there.

Six months after that first day of captions, he called and told me, “Please don’t ever stop doing what you’re doing. For years, I was so embarrassed because I didn’t know what people were talking about, and I just felt incompetent.” He had been depressed and didn’t want to interact much. After that, he would engage others about world news or things that were happening on TV. Captioning really does make a difference. It brings others into the fold.