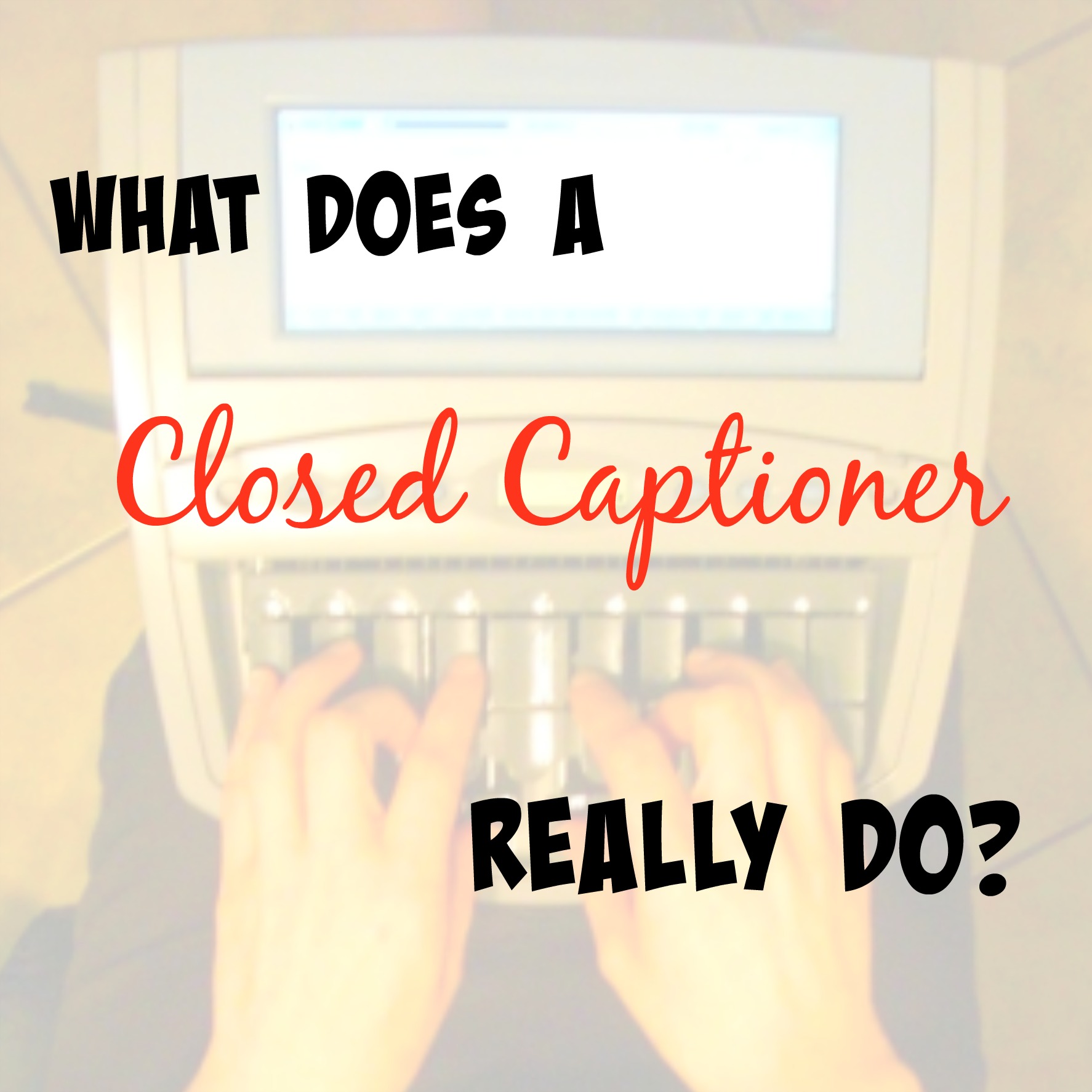 What Does a Closed Captioner Do?

You’re a What? What is That?

I’ve been a captioner for close to a year now. When I meet people, and they ask me what I do for a living, trying to explain my job to them can be really hard, people just don’t get it. They just have no clue what I’m talking about. So hopefully I can explain what and how awesome captioning is, how hard our job really is, and how captioners make it possible for everyone out there be able to enjoy television.

Most people think I do this: 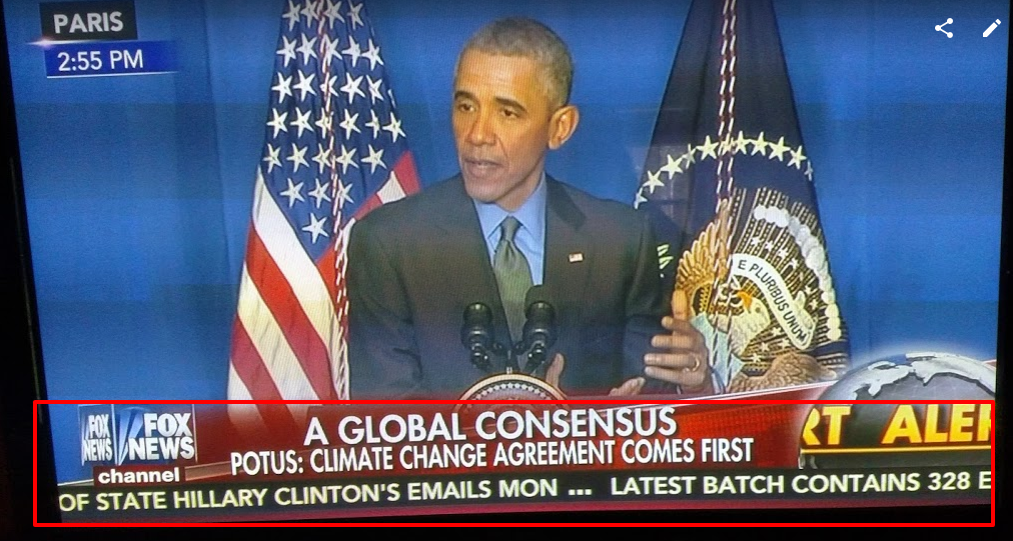 But in reality, I really make these words come up:

And I do it with a steno machine like this: 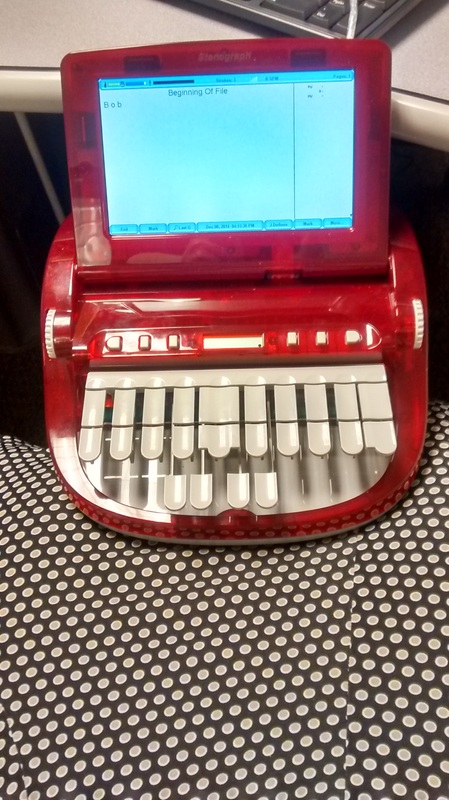 When people finally get what it is I do I usually get this reaction: 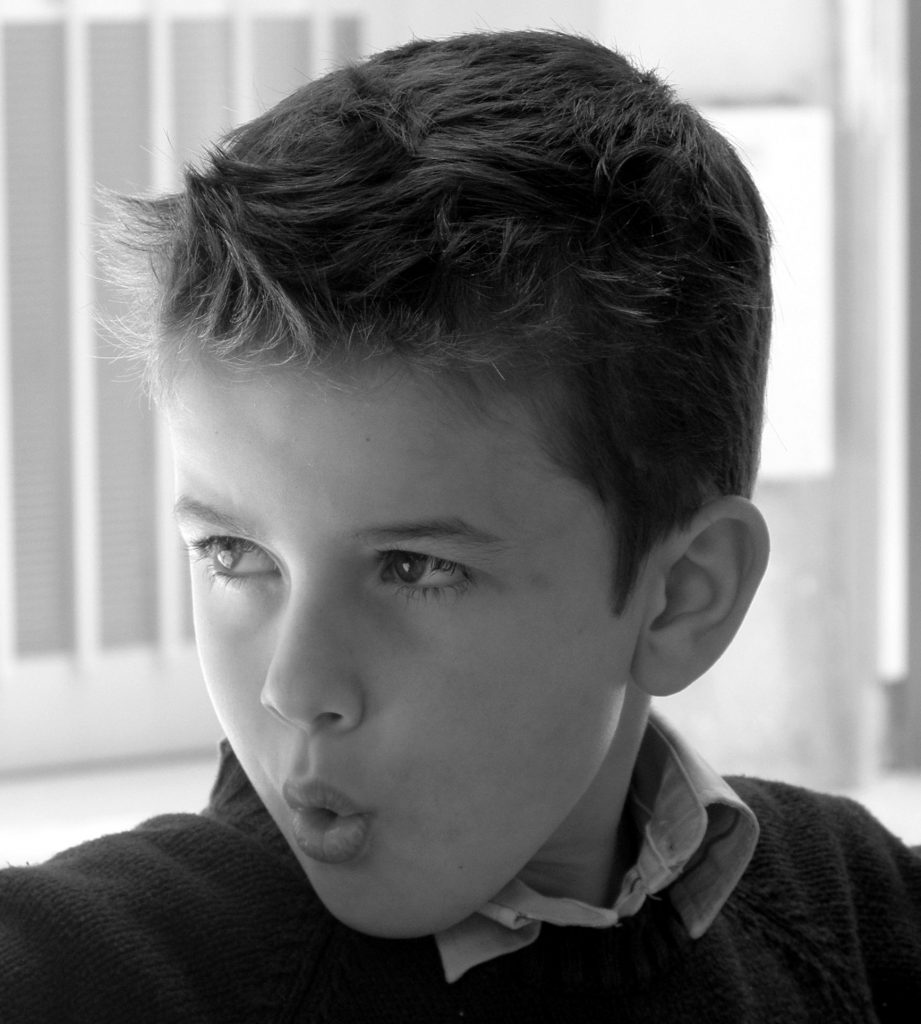 Then they think I just sit there and look pretty

Once people figure out that I’m the one that makes the words at the bottom of the screen come up, they almost always assume I get a script ahead of time and I’ve typed it before and I’m just loading it on a computer screen.

As much as I’d love for my job to be that easy, it isn’t. Sometimes I don’t even know what the show is going to be about, all I have is a title and what little I may find online about it. I write it all live, hearing it for the first time, the same as you.

Which can lead to some funny and embarrassing situations.

Newsflash: Captioning bloopers are not something we do on purpose! 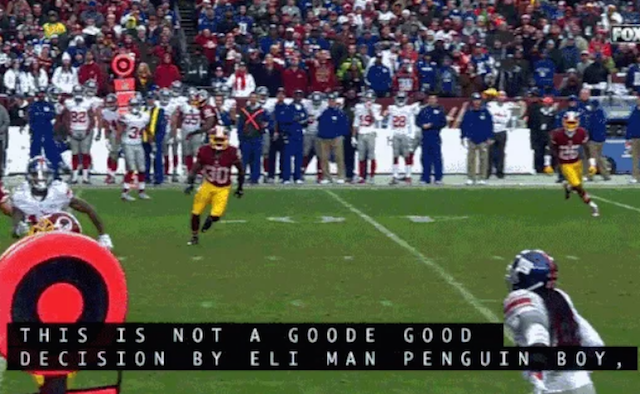 Trust me, the captioner didn’t do that for kicks and giggles. These sorts of accidents are terribly embarrassing, and it’s not a question of if a captioner will make a mistake like that, it’s a question of when.

To kind of give you a scenario so you can understand, imagine you’re sitting at home typing on your computer, but at the same time millions of people are standing over your shoulder seeing what you type. You can’t hit backspace, you can’t hit delete. Every mistroke you make, every misspelled word, goes out live and there’s nothing you can do about it.

But that’s what captioners do every day.

Not too long ago, it made headlines that a reporter in England correctly pronounced the 58 letter name of a Welsh village.

Different keystrokes are defined as specific words are in our dictionary. Some captioners’ dictionaries can have over 250,000 words entered. But if a word isn’t in that dictionary, it’s going to come up as gibberish, not the right word.

Remember what I said earlier that we don’t know what topics TV shows will be about? Captioners woke up and started to work that morning, never knowing that that village was going to be making the headlines. Since it’s not a popular place, I can bet you it wasn’t in most captioners’ dictionaries. Of course, after that first airing, captioning Facebook groups lit up and we all added that sucker to our dictionary just in case anyone happened to say it.

Think it’s tough to say? It’s even tougher to write. It was big news for a few days, and it seemed like everyone on television wanted to say it. Live. On air. Over. And. Over.

Yes, I’m a Captioner! Have your People Call My People

Captioning is a really unknown career, but some celebrities have been putting us in the spotlight lately. Heck, we actually made the news there for a couple of weeks. Remember Nigel Hayes during the 2015 March Madness? He put stenography on the map.

All ya’ll were like, “cool, what’s a stenographer?” And all of us are over here like, “finally, somebody actually acknowledged our existence!”

So what do you have to do to be a captioner?

Well, first you have to graduate from a court reporting and captioning school, which means writing at least 225 words per minute. But even 225 isn’t fast enough for captioning. Pay attention to how fast people talk on TV. TV personalities can speak up to 300 words per minute. And captioners have to write every word of it, and must be 99% accurate at the same time.

But not everybody who graduates from court reporting school can pass the accuracy tests needed to become a captioner. It’s tough to make the cut. I like to call captioning the Navy SEALS of stenography.

A Day in the Life of a Captioner

So now that you know what a captioner does and what it takes to be one, I’m going to take you inside a day in the life of a realtime captioner.

TV is on 24 hours a day, so I can work some funky hours. Today my first show started at 6am. I was feeling a little lazy today, so this is what I wore to work:

You didn’t think I’d really let you see a picture of me in my bathrobe, did you? But in case you were wondering, yes, I do work at home. Most captioners do.

Before I ever start working though, I always get up early enough to check the headlines for any breaking news overnight so I can add people’s names or place names to my dictionary so (hopefully) I won’t have any surprises. (Like that Welsh village!)

This particular morning, I was doing cut ins for a station out in California. A cut in is usually local weather and news that is aired during national shows such as “The Today Show.” Think of when Al Roker hands it off saying “…now here’s a look at what’s happening in your neck of the woods” and it goes to the local weather man. I then write what the local newscaster says.

Now that that’s over, it’s time to get dressed. (I can’t be a slob all day!) I’ve got some time to kill before I go on air next, but that doesn’t mean I can sit around at home and veg. I have a lot of work to do!

This weekend, I am scheduled to caption a college football game.

I know you’re probably thinking, cool, she gets paid to watch football! Sign me up for that job!

Captioning football, or any sport for that matter, is a lot of work. Watching football for you involves sitting on your plush couch, eating, relaxing and, more importantly, going to the bathroom when the urge hits you.

Yes, I *technically* get paid for watching a football game. But there’s a lot of behind the scenes prep. First off, I have to add every player’s name, plus the coaching staff, the announcers, any outstanding past players on the team just in case they mention them, and the name of the stadium to my dictionary so I can try to avoid a mistake like the penguin boy episode.

Most college football teams have more than 100 players on their roster. That’s a lot of names! Take a look at the list of names I have to enter. And this is just ONE TEAM. 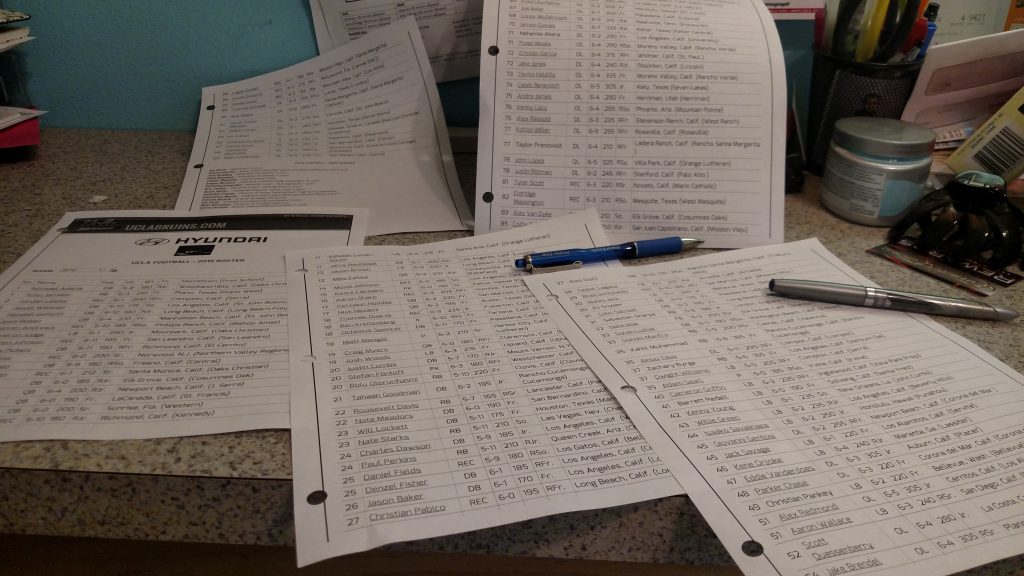 Oh, and the bathroom thing? Well, I can’t just go whenever I feel like it. If I just cannot wait until my programming is over, I have to go during the commercial. I can now pee in 30 seconds or less, can you?

Oh,  and if you need to do something more complicated and time-consuming in the bathroom than that? Yeah, well, that’s just not an option. Sorry, gotta wait till the show’s over.

I can work weird hours

I don’t work a regular eight or 12 hour shift like most people do. Today I had a couple of hours’ worth of shows during the morning, but I don’t have any shows until 7 pm tonight. So after my prep was done, I did some laundry, went to the store, and did some other mundane household stuff until 7:00. So in total I did six hours of programming today. Not too shabby!

Which brings me to….

When you’re at home on the weekends, or off of work on a holiday what do you want to do? Yep, watch TV. But it’s the law that all programming in the US must be captioned, so that means me and all my fellow captioners have to work so the deaf and hard of hearing can enjoy programming, too.

So that means we work in the wee hours of the morning, on the weekends, and every holiday. So far this year, I have worked during Memorial Day, Fourth of July, Veteran’s Day, Thanksgiving, and I’ll be working on New Year’s Eve and New Year’s. I don’t mind though, I love my job.

So if you ever run into a captioner, thank them! We work hard and sacrifice a lot to help everyone enjoy TV. Because remember, captioners do it live!

This article was written by the talented court reporter Julia of Stenofabulous, with permission to repost.  She has been a court reporter for 11 years now.  You can see more of her great work and articles over at her site.  This amazing article has been shared over 5,000 times on Facebook!

Not only is she a talented writer and stenographer, but she also designs some fun work accessories.  Who wouldn’t want one of these fun mugs? 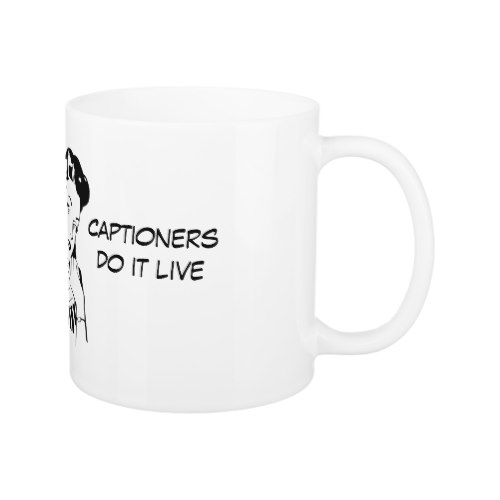 One thought on “What Does a Closed Captioner Do?”